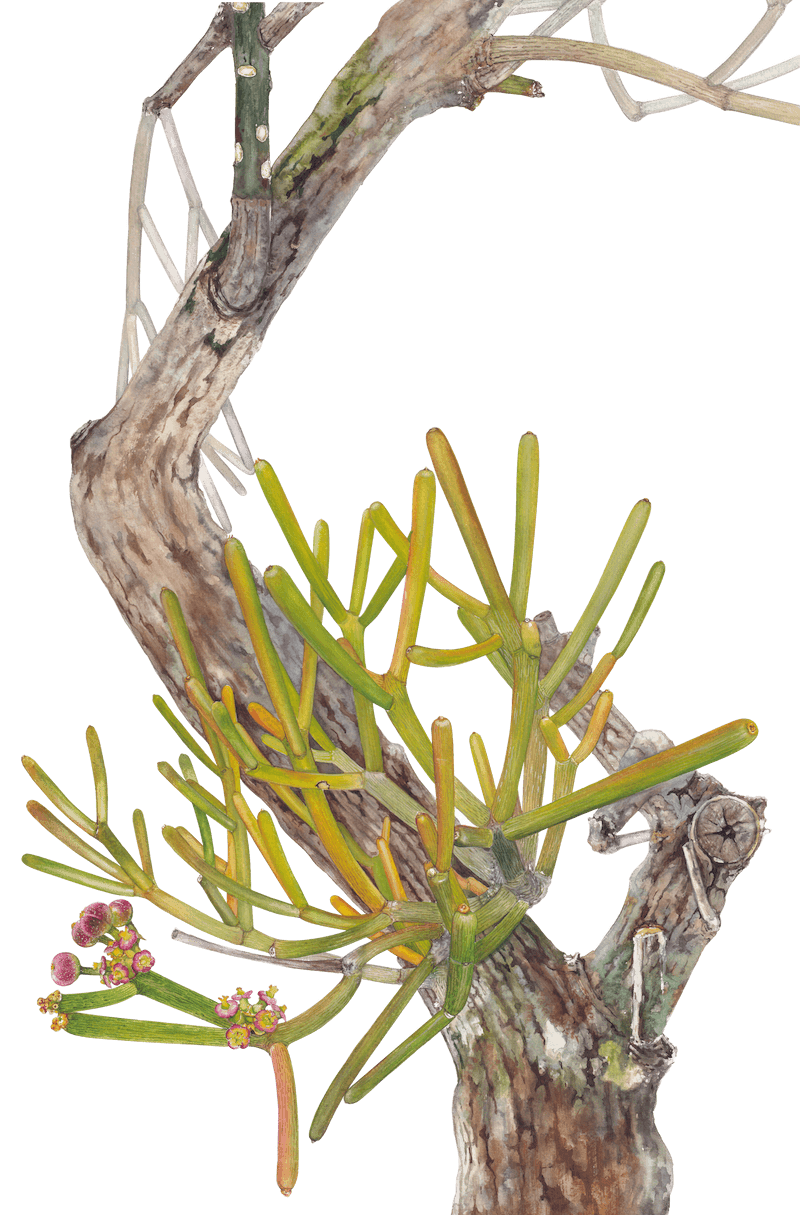 Euphorbia tirucalli, also known as fire sticks, the pencil tree or the milk cactus, is present in all the world’s tropical parts and is common throughout its range. The modern distribution of this species appears to have become confused by introductions and subsequent naturalization (it has a long history of utilization by people), so it is hard to know which countries are part of the original range. The tree is well-suited for dry areas such as savannas and on black clay soils and can be grown in areas not suited for other crops.

While the tree is used for medicinal purposes, its latex is toxic and can cause skin irritation and even temporary blindness. The spindly plant has no thorns and instead uses toxicity as means to ward off predators, hence the informal name “fire sticks.” Caution such as wearing eye protection is advised when handling the plant. However, young branches of the tree can be roasted then chewed to treat sore throats. Boiled root juice of Euphoria tirucalli also acts as an emetic in snake bite cases and for sterility in women. The latex is a milky emulsion of about 30 percent (principally euphol) terpenes in water, and oil obtained from the latex has been used in the linoleum, oilskin, and leather cloth industries. Methane also can be produced by anaerobic fermentation of Euphorbia tirucalli latex.

The wood is white, close-grained, and fairly hard. It is typically used for toys, rafters, beams and veneers. The tree is often widely planted for ornamental purposes or to provide a boundary or barrier, or support. Euphoria tirucalli is extensively used as a hedge plant in rural areas of East Africa.

In Iran, there has been interest in boosting plantations of Euphoria tirucalli given its potential for biofuel, medicinal purposes and resilience against pests. The ability of the plant to survive in the semi-arid climate and grow quickly has been cited as another benefit.

Euphorbia tirucalli oil is useful in the production of biodiesel in plants. Euphorbia tirucalli latex also fuel potential, given its diesel oil properties. Through the hydrocarbons of its latex, the species produce the equivalent to 10 to 50 barrels of oil L/ ha, whereas its biomass can yield 8,250 m3/ha of biogas.