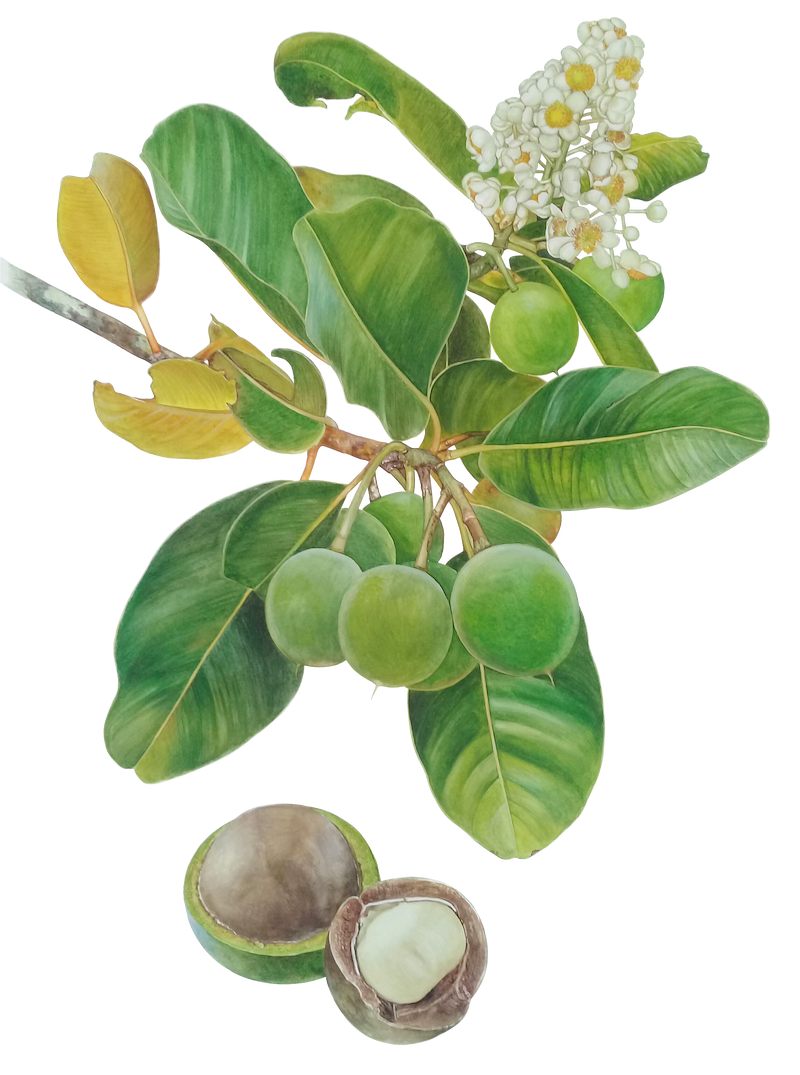 Also known as nyamplung or the tamanu tree, Calophyllum inophyllum is a pantropical species tree found in 38 countries stretching from East Africa to Southeast Asia, Oceania and the South Pacific. Originating in East Africa in Kenya, Tanzania, and Mozambique, the tree’s native range is unclear, making it hard to fully define native and introduced localities for the species. Nyamplung is well-adapted to coastal areas and lowland forests, and can grow in sandy, clay and degraded soils.

Calophyllum inophyllum is often planted as a roadside tree to provide shade and as wind breaks with its large canopy. Informally known as mastwood, the tree has long been used in shipbuilding, such as for the construction of canoes and small boats, but also for masts, keels, knees and pulley blocks. Similar to other species with bioenergy potential, nyamplung is also used in medicine. In Mauritius, for example, liquifying roots by extracting the essence of a substance is used to treat ulcers, boils, and ophthalmia. The bark can also be used to treat orchitis, while the latex has been traditionally used on the skin to treat rheumatism and psoriasis, and a leaf extract is used to treat eye infections as an anti-inflammatory. The stones of the fruit are used as marbles.

Since 2017, experimental nyamplung plantations cultivated on degraded lands in the Indonesian provinces of Central Java, Central and East Kalimantan are showing promising potential. In these areas, the tamanu tree demonstrates an ability to restore and improve former forests and peatlands that have been burned or damaged from commercial actives or large-scale deforestation.

Nyamplung oil offers much potential for bioenergy conversion, with similar properties to diesel fuel.  The species is a ready source of clean, carbon-neutral biodiesel, with a yield of 95 percent under optimal conditions. There are several technological options for the conversion of nyamplung oil into biodiesel. Further, the properties of Calophyllum inophyllum biodiesel meet American Society for Testing and Materials (ASTM) standards, an international standard, generally and yields more oil per hectare compared to other plants, with an average oil yield of 5,000 L/ha. These properties make the species an attractive alternate biodiesel feedstock.