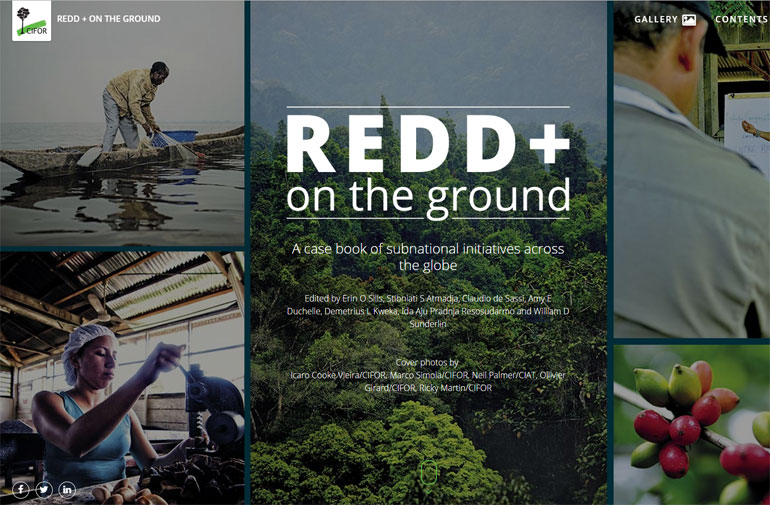 “REDD+ on the Ground: A Case Book of Subnational Initiatives Across the Globe,” published by the Center for International Forestry Research (CIFOR), gives results of five years of fieldwork in 23 project sites in six countries. The book is available in full text, PDF or ePub at: www.cifor.org/redd-case-book.

Tropical deforestation is a major contributor to climate change, accounting for up to 60% of greenhouse gas emissions in countries such as Indonesia and Peru. So the idea of paying people in developing countries to protect their forests through an international carbon market generated excitement when it was floated in 2007.

In the ensuing years, as the idea developed into REDD+, or Reducing Emissions from Deforestation and forest Degradation, some 300 forest carbon projects, or subnational initiatives, got under way.

“The world is at a crossroads where REDD+ has opened up an opportunity for forest conservation, leveraged by global concern about climate change,” the authors write. “But as this book illustrates well, REDD+ faces a steep uphill climb in reaching its objectives.”

The book highlights experiences from the projects in vivid detail, for example:

The book offers valuable lessons learned from challenges associated with REDD+ projects, including:

This book was produced with the support of the Norwegian Agency for Development Cooperation (Norad), the Australian Department of Foreign Affairs and Trade (DFAT), the European Union (EU), the UK Government and the CGIAR Research Program on Forests, Trees and Agroforestry, with financial support from the CGIAR Fund.

All stories, videos or photos for this book were produced with Creative Commons Attribution-Non-commercial-Share Alike License. Media are welcome to use all content as long as it is attributed correctly to CIFOR.

The Center for International Forestry Research (CIFOR) advances human wellbeing, environmental conservation and equity by conducting research to inform policies and practices that affect forests in developing counties. CIFOR helps ensure that decision-making that affects forests is based on solid science and principles of good governance, and reflects the perspectives of less-developed countries and forest-dependent people. CIFOR is one of 15 members of the CGIAR Consortium.
CIFOR: www.cifor.org
Forests News: forestsnews.cifor.org
CGIAR Research Program on Forests, Trees and Agroforestry: www.foreststreesagroforestry.org
Global Comparative Study on REDD+: www.cifor.org/gcs  |  www.forestsclimatechange.org
Global Landscapes Forum: www.landscapes.org