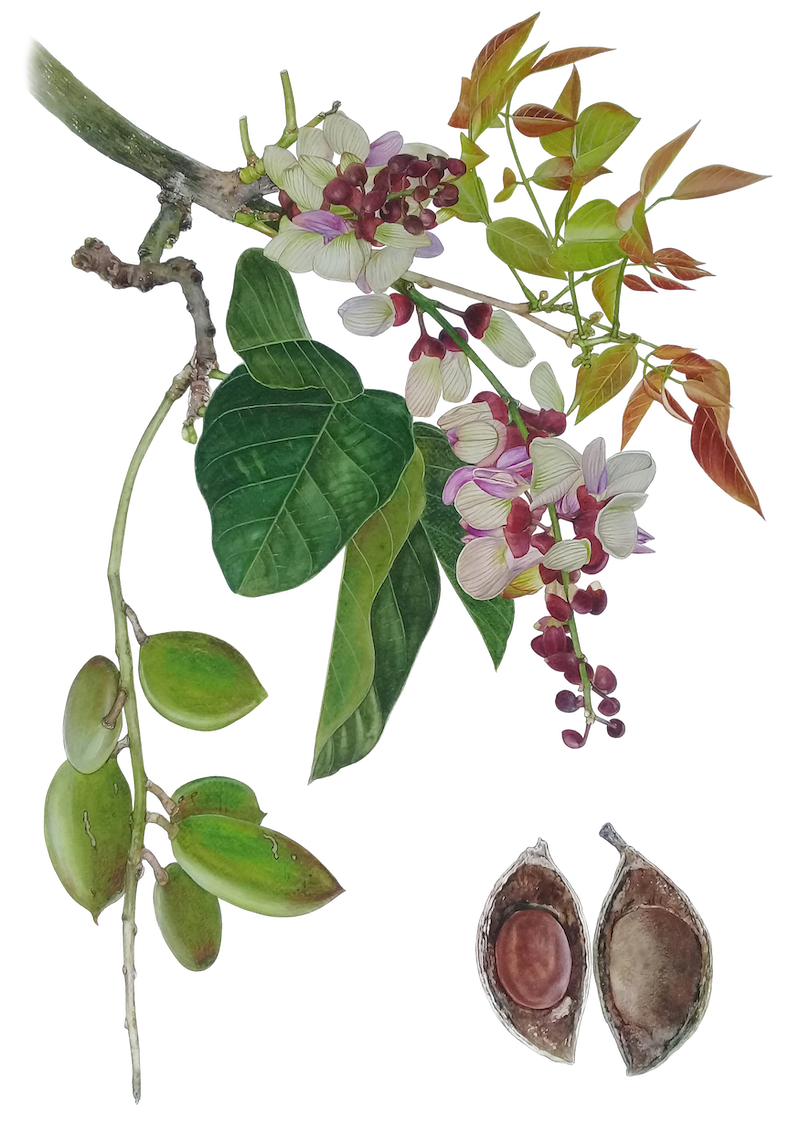 Pongamia pinnata, (syn. Millettia pinnata), also known as the malapari or karanja tree, has a large native distribution in Asia and Australia. The species is also cultivated in Africa, the United States, and other countries. Recent research has shown the tree has great potential for reforesting damaged or degraded landscapes. The tree grows well in humid and subtropical environments, and its dense root network and thick taproot make it drought tolerant.

Pongamia has wide-ranging benefits for both humans and animals. Valued as an ornamental tree, its fragrant flowers are a source of pollen and nectar from which bees produce dark honey. This honey can be harvested for apiculture and become a source of livelihood for rural communities. The leaves also have many medicinal purposes. Oil from the seeds can be used as a liniment for skin diseases and rheumatic illnesses. It is also used to treat stomach aches, dyspepsia and liver disease.

Meanwhile, the seed powder is used to help with bronchitis and whooping cough and is also prescribed as a tonic for fevers. For livestock farmers, the leaves have great value as fodder, particularly for cattle and goats.  Additionally, leaf shedding produces large amounts of organic litter for consumption by animals. Oil extraction from the seeds can also yield a press cake used as a fertilizer or as animal feed for ruminants and poultry. The tree oil has a long history of use as lamp fuel, as a raw material for soaps, varnishes and paints, to repel insects in storage areas and as a mosquito repellent. The wood can be used for fuel, often as charcoal, and the resulting ashes used as a dyeing agent.

Since 2015, in Ujung Kulon National Park in Indonesia’s West Java province,  researchers at CIFOR and CFBTI have conducted experiments to identify the potential of Pongamia pinnata as a biofuel crop. The research revealed that Pongamia pinnata contains very high oil content (up to 44.7 percent). However, various factors (e.g., extraction machines and methods, and genetic factors) make a significant impact on the amount of oil it produces.

The Pongamia pinnata trees have been increasingly used for oil production due to biodiesel use, which can be used to power water pumps and generate electricity in rural areas with limited access to electricity. Rural poor in India, for example, have made use of pongamia oil for these purposes. The seeds of Pongamia pinnata contain 30 percent to 45 percent oil with a high fatty content, which can be converted to biodiesel. The composition of the seed oil and its properties meet North American and European industry standards. Moreover, Other important properties of Pongamia pinnata, such as viscosity, flash point, pour point, and cloud point, are satisfactory for tropical and some temperate regions.