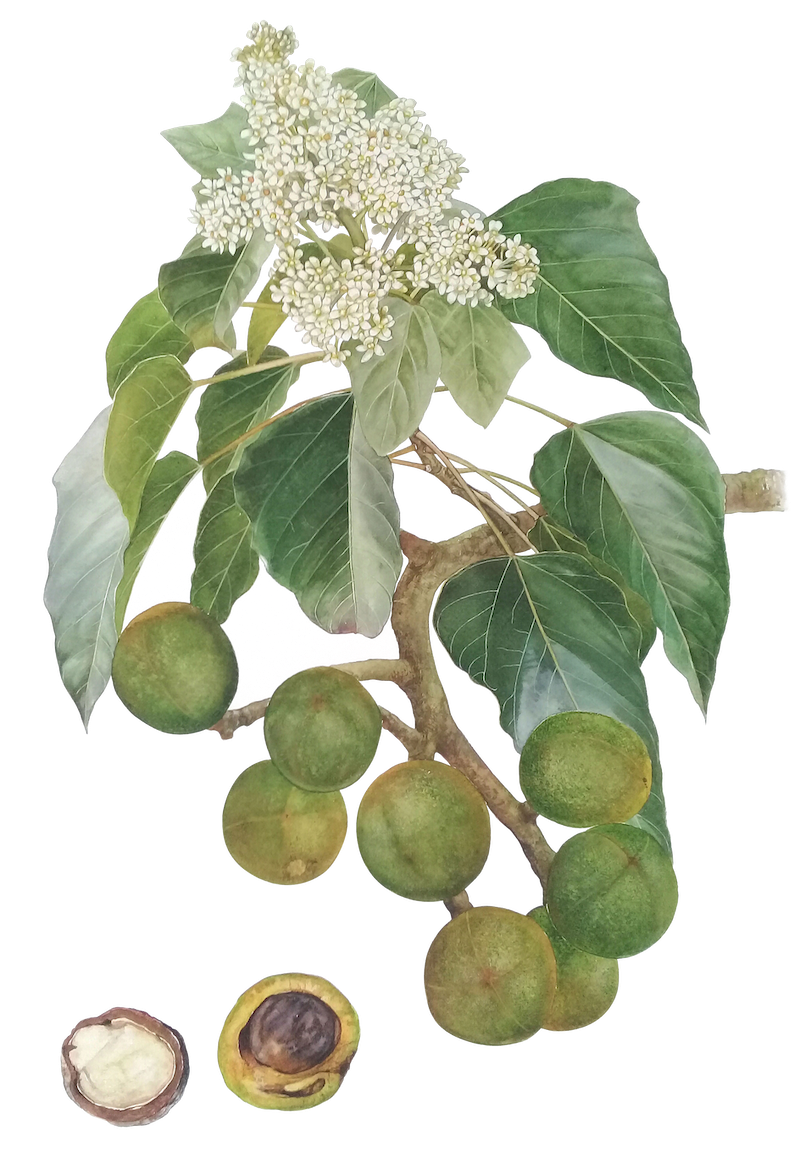 Aleurites moluccanus, or the candlenut tree, is native to subtropical and tropical Asia as well in the Australian state of Queensland. Although the species is found from China to Australia, the native range of Aleurites moluccanus is not fully known due to widespread cultivation. It was introduced to some of the South Pacific islands more than 1,000 years ago and has since been naturalized. The species has also been found across many other countries in the South Pacific, Africa, the Caribbean, and South America, where it has also naturalized.

The candlenut tree, known as the candleberry, Indian walnut, or kemeri tree, is commonly planted in villages and as a roadside tree and is often used to reforest and suppress weeds. With its silvery-green foliage, the tree also provides an attractive ornamental in landscaping, while the nut has long been burned to provide light, thus inspiring the candlenut name. In traditional medicine in Indonesia, the seed is used as a laxative, and pulped kernels are used in poultices to treat headaches, fevers, ulcers, swollen joints and constipation. Meanwhile, the bark is traditionally used to treat dysentery, the bark sap (mixed with coconut milk) to treat sprue (Celiac disease) and boiled leaves are applied externally to treat headaches and gonorrhea. In Japan, the bark has provided a balm to treat tumors. The seeds’ press cake is an excellent organic fertilizer rich in nitrogen (N) and phosphorus (P). Although it is used as animal feed, it must be used carefully due to its toxic effects.

Aleurites moluccanus also has nutritional, recreational and aesthetic value. Many cultures roast the nut for use in cooking and sauces. In Indonesia, a special cultivar with a hard stone fruit is grown for a game in which the objective is to break the opponent’s stone by hitting it with one’s own. In Hawaii, the shells of the stones are used to make traditional flower garlands, commonly known as leis. In Polynesia, dyes made from various parts of the tree have a long history of use on tapa cloth, canoes, and ink for tattooing. The candlenut tree’s wood is used for carving and making furniture, small utensils, and matches. It is also suitable for paper pulp.

Using traditional methods, Indonesian farmers intercrop the candlenut tree with other species such as coffee and sell the nuts whole on the market. They also extract the oil for use as hair tonic, massage oil, in aromatherapy and as a skin moisturizer.

Seed oil from the candlenut tree is suitable, with modification, for use as a substitute for diesel and the residues for conversion to alcohol or pyrolysis. The oil content is 15 to 20 percent and rich in polyunsaturated fatty acids with high iodine, oleic and various linoleic acids and oil yields as high as 300 kg/ha. The methyl and ethyl esters obtained by transesterification of the oil, have a high content of fatty acid unsaturated esters (greater than 89 percent).