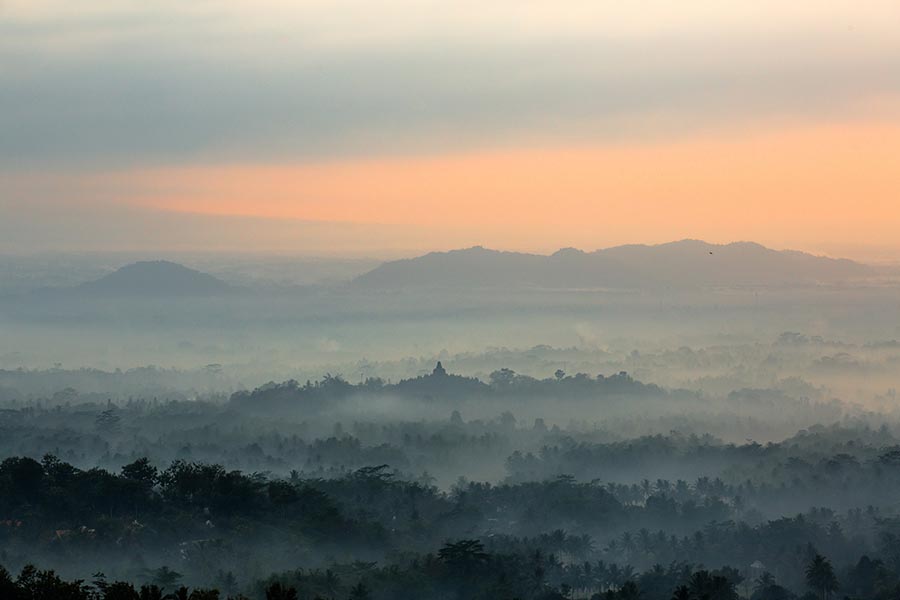 A view of Borobudur temple among the trees in Central Java, Indonesia. The nearby city of Yogyakarta has been announced as the host of next year’s Asia-Pacific Rainforest Summit (Photo: Aris Sanjaya/CIFOR).

Indonesia has announced that it will host the third Asia-Pacific Rainforest Summit next year. The announcement took place last week in Bonn, Germany, where thousands of negotiators, policymakers, researchers, journalists and campaigners had gathered for global climate talks at COP23.

Siti Nurbaya Bakar, Indonesia’s Minister of Environment and Forestry, invited Asia-Pacific countries to join in the ongoing efforts to conserve and improve the quality of the region’s forests through the biennial platform.

“Forests have a central role in the region’s economy, social and environmental protection, as well as climate change mitigation and adaptation. Forests in the Asia-Pacific hold resources that millions of people depend for their livelihoods,” she said at the Summit’s launch in Bonn.

Asia and the Pacific are covered by 740 million hectares of forests, accounting for 26% of the region’s land area, and 18% of global forest cover. More than 450 million people in the Asia-Pacific region depend on forests for their livelihoods.

“In an era in which partnerships have been established at various levels at the national, regional and international levels, and considering the importance of forests for climate change mitigation and adaptation, the third Asia-Pacific Rainforest Summit, or APRS, will be held from the 23 to the 25 of April 2018 in Yogyakarta, Indonesia,” Minister Nurbaya said at the Indonesia Pavilion.

Fiji’s Attorney-General and Minister Responsible for Climate Change, Aiyaz Sayed Khaiyum, at the launch stressed the importance of forests in the battle against climate change.

He highlighted the role of the Asia-Pacific Rainforest Partnership, which was established at the first APRS in Sydney after a strong show of support from regional leaders to help realize the global goal of ending natural rainforest loss by 2030. The partnership works to promote action to reduce emissions from deforestation and forest degradation in the Asia-Pacific region.

“Fiji has been an active participant in the Partnership. The importance of sustainability in managing our forests is part of our plan of action in fighting climate change,” he said.

Fiji, which holds the COP23 Presidency, is determined to become a more climate-resilient country. The Government of Fiji at the launch expressed its determination to promote healthy forests as natural buffers and barriers to the adverse impacts of extreme weather events.

“In our country, 54 percent, or one million hectares of Fiji is forested. We are also protecting these forests and their ecosystem services with the preservation and protection of reserves of these areas throughout Fiji,” Minister Khaiyum said.

Minister Nurbaya hoped that Indonesia would address a range of regional and global issues at the next Summit, and bring into action “a number of agenda such as the NDCs, biodiversity and conservation. We will try to concretely solve these issues,” she said, adding that “Australia had expressed its commitment to support, including technical aspects.”

The first APRS was launched in Sydney in 2014 and the second was held in Brunei Darussalam in 2016. At these Summits, government and private sector representatives pledged their commitment to action on climate change and forests. The Summit in Brunei attracted more than 600 stakeholders from 40-plus countries.

“The [next] Summit will provide a special opportunity for Indonesia to showcase its regional leadership to help build practical partnerships and to deliver our shared goals under the Paris Agreement,” said Australia’s Minister for the Environment and Energy, Josh Frydenberg.

“Australia launched the Partnership because we know forests are critically important to the region and the Pacific Island countries,” he added.

On the issue of financing initiatives under the Partnership, Minister Frydenberg said that “beyond capacity building, finance is extremely important. Australia is a donor too, and a current co-chair of the Green Climate Fund (GCF). We are very pleased the Fund has just agreed to allocate 500 million dollars for a pilot of results-based payments for reducing emissions from forests.”

The news was welcomed by the FAO Director for Forest Assessment, Management and Conservation, Eduardo Mansur.

“The Summit will bring us a lot in terms of financial mechanisms. I am glad to hear from Minister Frydenberg the good news about the [funds] allocated. It’s a lot for piloting. The limit for projects in GCF is 30 million [dollars] per country in the beginning,” Mansur said.

“You all recall that it was 10 years ago exactly at UNFCCC COP13 in Bali that REDD came to life. The 2018 Summit gives Indonesia the opportunity to show what has happened in this 10-year period, and the excellent work that President Jokowi and his team are promoting on how to manage sustainable forestry. We are thrilled to join in April,” he said.

REDD+ region: How the Asia-Pacific is developing systems for measurement, reporting and verification

Highlights from the 2016 Asia-Pacific Rainforest Summit

The Center for International Forestry Research (CIFOR) advances human well-being, equity and environmental integrity by conducting innovative research, developing partners’ capacity and actively engaging in dialogue with all stakeholders to inform policies and practices that affect forests and people. CIFOR is a CGIAR Research Center, and leads the CGIAR Research Program on Forests, Trees and Agroforestry (FTA). Our headquarters are in Bogor, Indonesia, with offices in Nairobi, Kenya; Yaounde, Cameroon; and Lima, Peru.