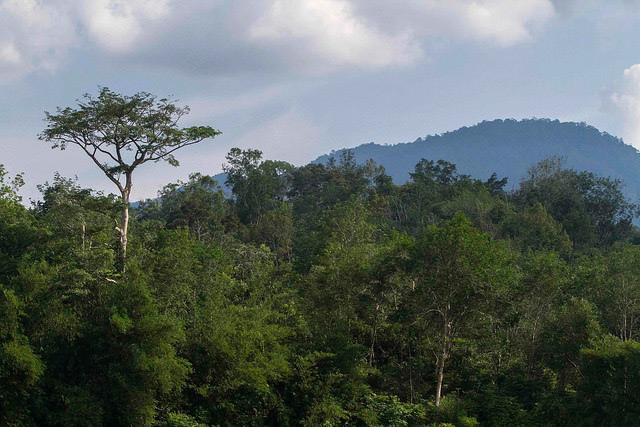 Findings of 10-year project could upend conceptions of how forests, people interact

20 March 2014 — Forests play a crucial role in sustaining people’s incomes — but to what extent? Until now, development actions related to forests and livelihoods have been based on incomplete or fragmented data. In many cases, forestry has been combined with agriculture in national income statistics — or not counted at all.

Now, in the most comprehensive study on the links between the environment and livelihoods to date, researchers have challenged conventional wisdom about the importance of environmental income, the roles of men and women in forest-product use, and the function of forests as safety nets. In fact, income from forests and other natural environments makes a significant contribution to the livelihoods of millions of people in developing countries, according to the study, although not always in the ways case study research had suggested.

The global study is the product of the Poverty and Environment Network (PEN) (www.cifor.org/pen), a collaborative effort led by the Center for International Forestry Research (CIFOR). Five complementary research papers tackle the themes of income generation and rural livelihoods; safety nets during shortfalls; gender and forest use; forest clearing and livelihoods; and tenure and forest income. The five papers — from which preliminary findings were released in 2011 — will appear in an upcoming special issue of World Development. The first paper can be read here.

Among the study’s findings:

Sven Wunder, lead editor of the publication, said: “Our results indicate that, even some 10,000 years after the start of the Agricultural Revolution, rural people in developing countries still depend strongly on foraging from nature for their livelihoods.”

The size of environmental incomes, i.e. wood, game, plants, and other resources harvested from the wild, has until now been poorly documented, and is not obvious to most policymakers. Many existing tools for assessing poverty and income — such as poverty reduction strategy plans, poverty surveys, the World Bank’s Living Standard Measurement Survey, and national income accounting systems — fall short of capturing adequately the importance of the income from natural resources, so that its true value in the livelihoods of the world’s rural poor remains largely invisible.

Simply ignoring this large “hidden harvest” risks giving rise to policies or reforms that strip local people from access to extractive resources, the study’s authors write. Moreover, they indicated that policy interventions intended to address poverty through improved market access and integration may undermine forest conservation efforts. Given one of the study’s crucial findings — that people with relatively higher incomes are responsible for a larger share of deforestation and forest product extraction than the poorest — an increase in assets and income of rural households could provide the means to increase forest clearing and use, challenging hopes for win-win solutions.  Findings also suggest important local benefits of maintaining forest cover, so the potential for combining climate change mitigation with livelihood benefits may be larger than often assumed.

The study itself was a massive undertaking.

Building on three methods workshops between 2004 and 2006, 33 PEN partners and their teams collected field data between 2005 and 2008. Over 12 months, they surveyed more than 8,300 households in 333 villages on 58 sites in 24 developing countries. In so doing, they conducted some 36,000 household visits, generating about 250,000 questionnaire pages. Financing such a broad project would have been difficult, so PEN researchers tapped PhD students to assist in the effort — in return, creating a collaborative network for them, offering some financial support and access to workshops and supervision.

“It worked,” said Arild Angelsen, an economics professor with the Norwegian University of Life Sciences and coordinator of the global study. “They got an answer to their emails and questions the next day. They appreciated that they were not alone in the field. I think PEN provides a model for how to create a community of researchers and to collect big data sets in an effective way.”

The amount of data the students compiled is impressive: With more than 2,300 data fields, the PEN global database now contains more than 15 million data cells. The dataset will soon be made publicly available for use in future research.

Detailed results from this study could be used to design country-specific survey components that can capture the lion’s share of environmental incomes by focusing on the locally most important products.

“We used random sampling within villages, but PEN is not a random sample of sites,” Wunder said. “We had to find partners willing to participate and accept the sites they had chosen, and then free resources to fill some of the geographic holes, particularly in West Africa. But we still have balance in terms of forest types and rural areas in the developing countries of these three continents. Along a series of dimensions, we cover all but the most deforested and densely populated rural areas quite well. This is the universe we can reasonably extrapolate results to.”

CIFOR’s blog, Forests News, will publish an article about this research on Friday, 21 March — International Day of Forests.

The Center for International Forestry Research (CIFOR) advances human wellbeing, environmental conservation and equity by conducting research to inform policies and practices that affect forests in developing counties. CIFOR helps ensure that decision-making that affects forests is based on solid science and principles of good governance, and reflects the perspectives of less-developed countries and forest-dependent people. CIFOR is one of 15 members of the CGIAR Consortium.
Forest News: www.forestsnews.cifor.org
CGIAR Research Program on Forests, Trees and Agroforestry: www.foreststreesagroforestry.org
Forests Asia Summit: www.forestsasia.org