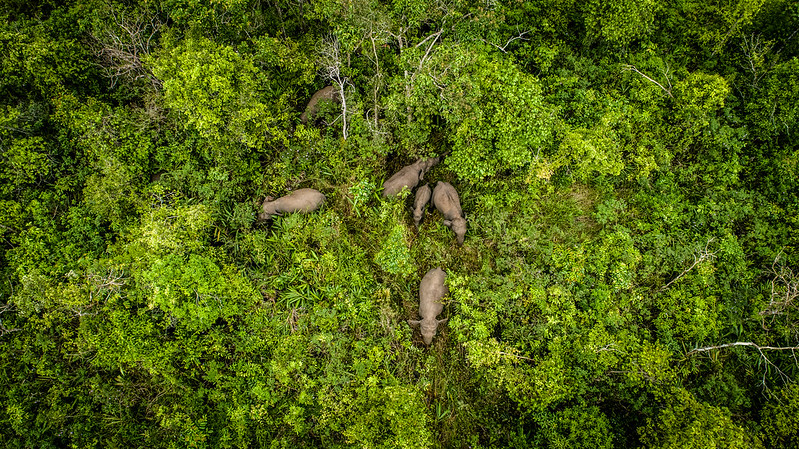 Fires have also reportedly ravaged elephant habitat in Padang Sugihan Sebokor Wildlife Reserve, which lies southeast of Sembilang and serves as a corridor for wild elephants in South Sumatra.

One report estimates that half of the reserve has suffered fire damage. Since elephants in South Sumatra have such wide ranges it can be difficult to determine exactly how populations were impacted by the most recent fires.

As with Sembilang, Padang Sugihan is experiencing issues related to peatland draining and forest encroachment by industry and communities. In the past it has been well protected for the most part, even with limited budgets for conservation, according to Michael Allen Brady, principal scientist at the Center for International Forestry Research (CIFOR).

This protection, however, has not helped prevent this year’s damaging fires.

“We’re able to confirm there has been a lot of burning in the [Padang Sugihan] reserve the past two months,” Brady said.

“One of the reasons it is burning frequently is that they dug canals through it, seven major canals, and hundreds of tertiary canals,” he said. “It was logged over in the 70s and converted to transmigration lands and then they decided not to develop it and turned it back to the forestry ministry. Unfortunately they drained it but they had not cleared the forest, so it was essentially a timebomb, a standing peat forest that had been drained.”

Once the area was designated a wildlife reserve, the military herded elephants into the area in the early 1980s and the government recognized the reserve as elephant habitat. Brady said that following this, the government designated an elephant management unit, built an office complex on the border of the park and encouraged public visitation, but the situation “has deteriorated” in recent years to the point where the unit is non-functioning.

“Unfortunately there’s been no systematic monitoring of the [elephant] population in the reserve, but clearly it has gone from a population of about 400 to around a dozen,” Brady said.