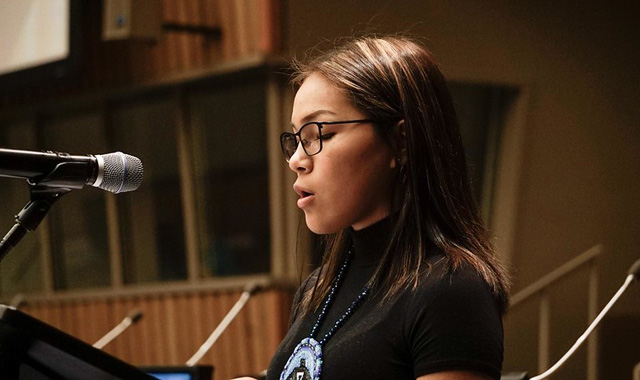 Peltier first caught media attention when she confronted Canada’s Prime Minister Justin Trudeau in 2016. At the winter meeting of the Assembly of First Nations, Peltier was invited to give the Prime Minister a gift. Instead she gave him a message. "I am very unhappy with the choices you've made.” she told him publicly.

By phone, Peltier explained she was frustrated with Trudeau’s failure to provide clean water to First Nation communities and his decision to greenlight controversial pipeline projects. Trudeau responded by promising to do better. “As a youth I’m going to hold him accountable,” Peltier told Vice. “Because he made a promise.”

Native American and First Nation activists have long gone to the U.N. to demand Indigenous rights where the U.S. and Canada have fallen short. In 2007, the United Nations passed the Declaration on the Rights of Indigenous People (UNDRIP). The sweeping decree "emphasizes the rights of Indigenous peoples to maintain and strengthen their own institutions, cultures and traditions.” Addressing everything from land rights to cultural appropriation, the declaration explicitly stated world leaders should work with indigenous communities on global challenges like climate change. Of all the U.N. member states, only four countries voted against the declaration including the United States and Canada.
Read more on Vice (US)