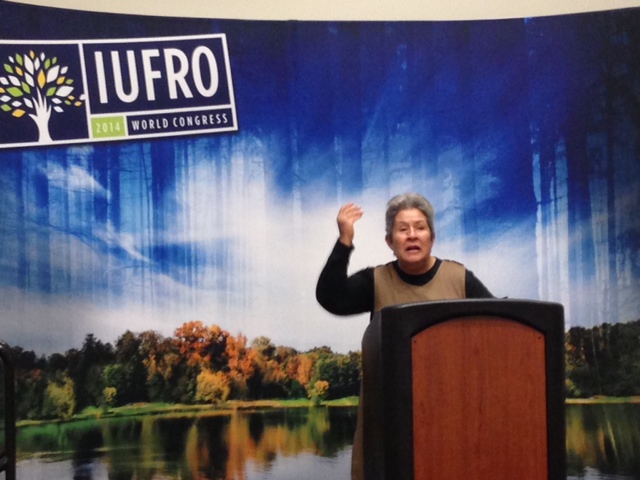 Mexican environmentalist Martha Isabel Ruiz Corzo is this year’s winner of the Wangari Maathai Award, receiving the prize at the XXVI IUFRO World Congress in Salt Lake City for her extraordinary work in preserving the forests of the Sierra Gorda Biosphere Reserve in the state of Querétaro, México.

Ruiz Corso founded the Grupo Ecológico Sierra Gorda (GESG) in 1987 to save the reserve from unregulated development, to promote environmental education, and to contribute to conservation and economic development.

The Sierra Gorda Biosphere Reserve is one of Mexico’s most biologically diverse areas and home to threatened species such as jaguars, green macaws, and Humboldt butterflies. Distinguished as UNESCO World Heritage site since 1997, the protected area is co-managed by Mexico´s Commission of Protected areas and GESG.

The Wangari Maathai award, presented by CIFOR’s partner, the Collaborative Partnership on Forests (CPF), recognizes the efforts of individuals who devote their lives to the preservation, restoration and management of all types of forests, raising awareness of their importance to rural livelihoods. The award, which comes with a USD 20,000 prize, was established by the CPF to honor the memory of Kenyan environmentalist Wangari Maathai, a champion of forest issues worldwide and the first African woman to win the Nobel Peace Prize.