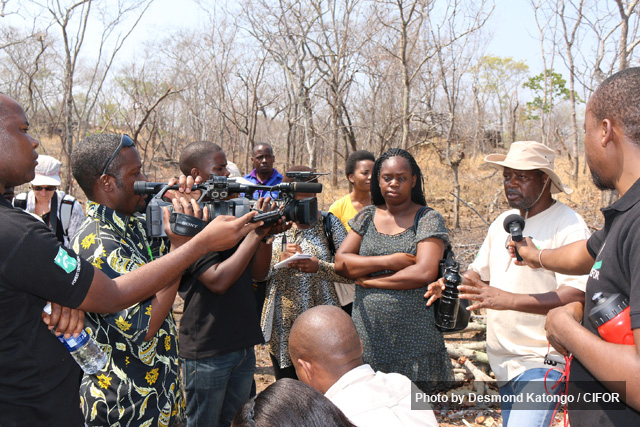 It was a first for CIFOR, and also a first for editors from Zambia’s leading newspapers and broadcasters, who gathered in Nyimba in eastern Zambia for a two-day workshop to examine the state of environmental reporting in the country, and to find ways to increase the number and improve the quality of stories dealing with environment, forests and climate change.

The media editors’ workshop, organized as part of the USAID-funded (United States Agency for International Development) Nyimba Forest Project in Zambia, brought together eight editors, as well as CIFOR scientists; research partners from the Zambian forest department; Royal highnesses from the four chiefdoms in Nyimba; the District Womens Association; and the Community Youth Concern. The workshop included a day-long excursion to the community of Zuwalinyenga, where editors saw first-hand the extremely difficult and destructive process of charcoal production, one of the leading causes of forest degradation. Participants of the workshop concluded that environmental reporting could be every bit as interesting as any other kind of news coverage, and that, given the rampant rate of deforestation and forest degradation in Zambia and the noticeable effects of climate change, it is also crucial.

A 2008 study by the Zambian government showed that the country has had one of the highest levels of deforestation in the world, between 250,000 and 300,000 hectares per year. Zambian experts estimate that this high rate of deforestation is largely due to agricultural expansion, infrastructure development and charcoal production. However, the links within and among these activities are not well understood—conditions exacerbated by limited monitoring and research of forest use.

The need to raise awareness on the impacts of deforestation and forest degradation on the environment and livelihoods in Zambia prompted CIFOR to partner with the Zambian media.
The editors’ workshop was a follow-up to a highly successful workshop in February this year, during which Zambian journalists identified a lack of interest in environmental stories among their editors as an obstacle to more and better reporting on environmental issues in the country.

“CIFOR has held a series of events such as ‘the media breakfast meeting’, which showed lack of awareness on environmental issues among the country’s locals journalists,” said CIFOR scientist Davison Gumbo. “The quality of reporting also showed that a lot needed to be done. Consequently, we decided to organize these workshops with journalists and editors aimed at exposing them to various climatic and forestry related issues.”

“The media editors’ meeting truly resonated well with what journalists had raised in an earlier meeting,” Gumbo said. “The lack of knowledge among editors on environmental issues was visible during the meeting. After exposing them to the charcoal production process, they were able to link the two sides of the coin, which I think was amazing. The local community also showed their willingness to stop charcoal production, provided that viable alternative sources of income were made available,” he added.

The Nyimba Forest Project, led by CIFOR and with USD 3.1 million in support from USAID, conducts research and development activities on models for measuring, reporting and verification (MRV) for Reduction of Emissions through Deforestation and Forest Degradation (REDD+) in the Miombo socio-ecological system, providing key support to Zambia’s national readiness strategy for REDD+.