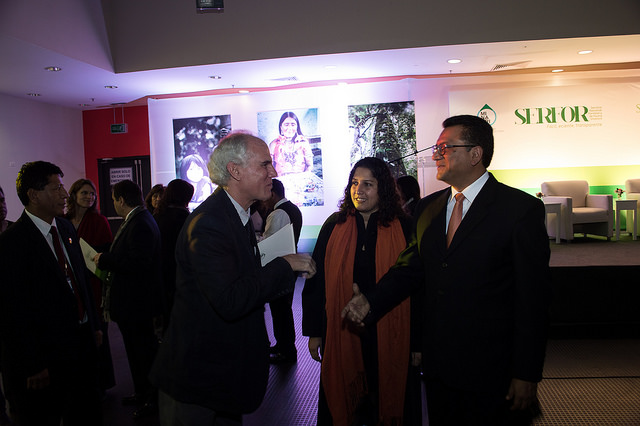 One of CIFOR’s principal scientists has been appointed the President’s Nominee and Regional Liaison for Latin America for the International Union of Forest Research Organizations (IUFRO) for the period 2014-2019.

Manuel Guariguata, Principal Scientist and Team Leader of CIFOR’s Lima hub (pictured left, meeting with Fabiola Muñoz, Director of National Forestry and Wildlife Service, and Juan Manuel Benites, Peruvian Minister of Agriculture), will take up the position during the XXIV IUFRO World Forestry Congress 2014 in Salt Lake City this week. As part of the role, Guariguata will lead promotional activities undertaken in Latin America by IUFRO, an international network of forest scientists and organizations aimed at supporting global cooperation in forest-related research.

Guariguata is joining a delegation of 15 CIFOR scientists at the Congress this year, where he will discuss his research on the sustainability of Brazil nut production and timber in Madre de Dios, Peru, as a panelist for the session “What Future for Tropical Silviculture?”, co-organized by CIFOR.

Other CIFOR scientists will also present and discuss their research findings in more than 10 sessions and side events during the week, including at two sessions on gender organized by CIFOR: “Gender, Participation and Climate Change” and “Gender and Forestry Value Chains”.