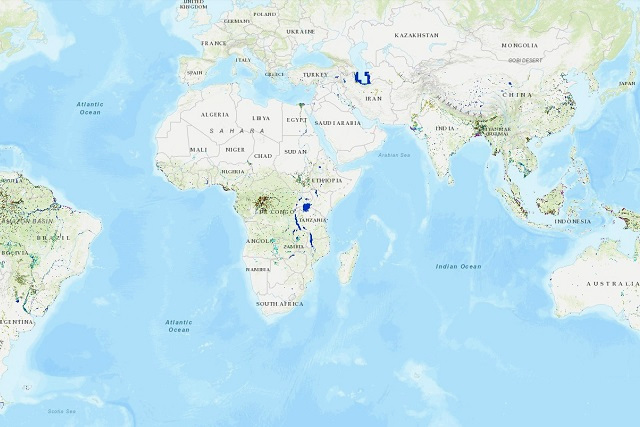 In honor of World Wetlands Day – which takes place every year on February 2 – explore the interactive Global Wetlands Map and its extensive collection of wetlands, histosols, or peaty soils, and their carbon stocks.

Originally launched in 2016 to help identify the location of wetlands and how far they extend, the map comes from the Sustainable Wetlands Adaptation and Mitigation Program (SWAMP), a collaborative effort between the Center for International Forestry Research (CIFOR) and the United States Forest Service.

This comprehensive map took two years to develop and is based on spatial models of long-term water excess after meeting atmospheric demand and overlaying geomorphological characteristics, which allowed the developers to locate water accumulation that develop wetlands. Visitors can explore and download the map while registered users can verify information and add their own data.

CIFOR Principal Scientist and Principal Investigator for SWAMP Daniel Murdiyarso said one of the map’s features, its carbon stock information, is particularly important in terms of climate change because it allows researchers to identify potential areas for climate change mitigation by conserving the existing carbon-rich pools and enhancing carbon sequestration and storage. The map is also a useful tool to locate and prioritize restoration activities, such as rewetting and revegetating, as measures for climate change adaptation.

“The map has been so far cited and used by scientists working in this area, and more attention has been given by government agencies for monitoring and restoration purposes,” adds Murdiyarso.

World Wetlands Day is celebrated on February 2 annually in honor of the adoption of the Convention on Wetlands on this day in 1971. The day was created to raise awareness of the important role of peatlands for people and the planet. The 2018 theme is “Wetlands for a Sustainable Urban Future” and draws attention to the vital role wetlands play in urban areas, including absorbing excess rainfall, which reduces flooding and disasters in cities and acting as a filter for domestic and industrial waste.

For more on this topic, please contact Daniel Mudiyarso at d.murdiyarso@cgiar.org.