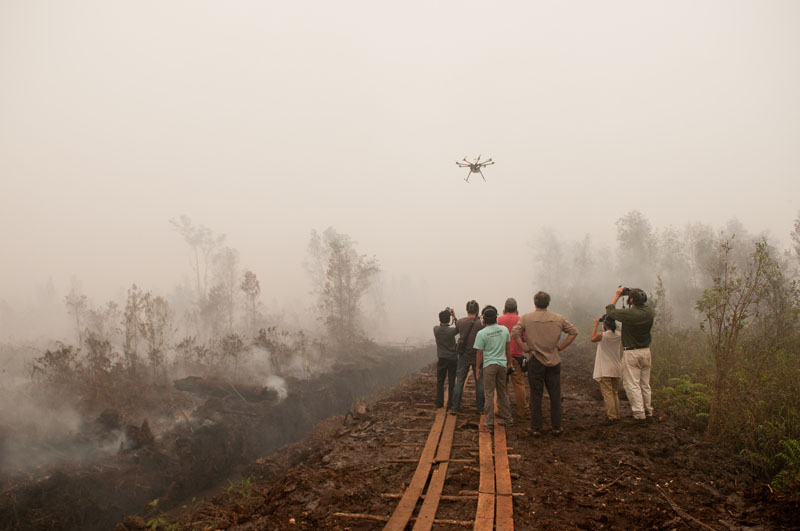 28 June 2016 – A new study of the forest and peatland fires that burned across maritime Southeast Asia in 2015 has found that the carbon emissions were the largest since 1997, when an even stronger El Niño also resulted in extended drought and widespread burning.

Using a pioneering combination of regional satellite observations, on-the-ground measurements in Kalimantan, Indonesia, and the Copernicus Atmosphere Monitoring Service (CAMS) modeling framework, the study’s authors determined that the daily carbon emissions released by the fires in September and October 2015 were higher than those of the entire European Union (EU) over the same period.

The study, published in Scientific Reports, was carried out by a team led by Vincent Huijnen of the Royal Netherlands Meteorological Institute and Martin J. Wooster of King’s College London and the NERC National Center for Earth Observation, and included Daniel Murdiyarso and David Gaveau from the Center for International Forestry Research (CIFOR).

Read about the study on Forests News here.  Access the full paper here.

In September and October 2015, dry conditions and the delayed onset of seasonal rains contributed to extensive landscape fires, with the resulting smoke strongly impacting air quality in the region and the health of millions of people.

This research team is the very first to have measured the ground-level smoke composition from active peatland burning in the region. They combined that data with satellite information to derive the first greenhouse gas emissions estimates of the 2015 fires, finding that 884 million tons of carbon dioxide was released in the region last year – 97% originating from burning in Indonesia. The corresponding carbon emissions were 289 million tons, and associated carbon dioxide-equivalent emissions 1.2 billion tons.

Satellites provided data on the heat output being radiated by the fires, as well as information on the amount of carbon monoxide present in the surrounding atmosphere. From this, the total carbon emissions were calculated by combining those measurements with the newly determined emission factors of carbon dioxide, carbon monoxide and methane measured at fires burning in October 2015 outside of Palangka Raya in Central Kalimantan province – one of the hardest-hit fire sites.

“There have been some isolated studies before where people artificially set fires in the lab to try to understand the chemical characteristics of peatland fire smoke in Indonesia. But no one had done this on natural fires, and especially not on the kind of extreme fires seen in 2015. We are the first people to do that,” said Wooster.

The results indicate that regional carbon dioxide emissions from landscape fires were 11.3 million tons per day in September and October 2015, exceeding the EU’s daily rate of 8.9 million tons. Further, 77% of the regional fire carbon emissions for the year occurred during that time – at the peak of the fires.

The scientists also compared their results to those of the 1997 El Niño-related fires in the region.

The study’s results have wide implications for future research, whether it is in respect to studies of landscape burning or the impacts of fire emissions on climate and public health, and they contribute to better understanding the need for fire prevention and improved landscape management.

“What is important is the applicability of a study like this in helping policy makers to use more accurate fire emission factors to design policy and act to prevent further fires and greenhouse gas emissions,” CIFOR scientist Daniel Murdiyarso said.
————————————————————