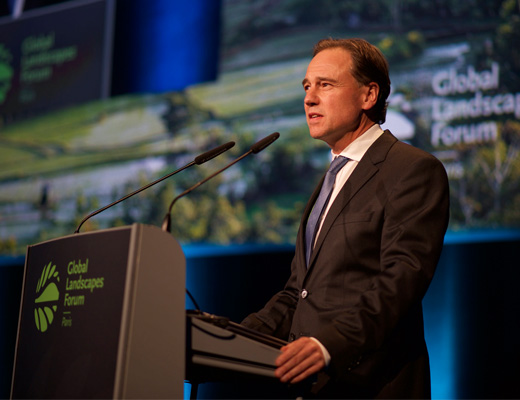 The Center for International Forestry Research (CIFOR) is pleased to be a founding partner of the International Partnership for Blue Carbon, announced by the Australian Minister for the Environment, Greg Hunt, at the 2015 Global Landscapes Forum in Paris on 6 December.

“It is an enormous opportunity, as has been recognized here, for reducing emissions, for improving marine biodiversity, and in particular for providing support for traditional communities and coastal communities,” Minister Hunt said at the launch of the initiative, which was established by the Australian Department of the Environment.

Daniel Murdiyarso, a principal scientist at CIFOR who contributed to the IPCC Wetlands Supplement, welcomed the initiative. “Having political will at such a high level is much appreciated,” he said.

Research by CIFOR and its partners over several years has demonstrated the immense value of mangroves for multiple reasons, including as carbon sinks, especially in the case of Indonesia, which has the largest area of mangroves of any country in the world.

“We need to work more from the adaptation angle,” Murdiyarso said. “We know very little about how coastal ecosystems and the communities who depend on them will cope with sea level rise and other stressors.”

CIFOR will also contribute to the partnership with a learning toolbox developed by the Sustainable Wetlands Adaptation and Mitigation Program (SWAMP) to inform policy makers on the role of tropical wetlands and adaptation and mitigation strategies to climate change.

The full press release issued by the Australian Department of the Environment is reproduced below.

At the Global Landscapes Forum in Paris, Australia is pleased to announce that we are establishing an International Partnership for Blue Carbon.

The Partnership brings together governments, non-profit organisations, intergovernmental agencies, and scientists to increase understanding of, and accelerate action on the important role of coastal blue carbon ecosystems in climate change action.

Research has already demonstrated that coastal ecosystems such as mangroves, seagrass beds and salt marshes can be much more effective than forests at sequestering carbon.

The Partnership establishes a collaborative network of governments, non-profit organisations, intergovernmental agencies, and scientists to support:

This growing recognition of the value and importance of coastal blue carbon ecosystems has motivated a range of activities to better manage blue carbon resources, including in the context of REDD+, Nationally Appropriate Mitigation Actions (NAMAs), voluntary carbon markets, and post-2020 Intended National Determined Contributions.

The International Partnership for Blue Carbon seeks to scale up and amplify such efforts.

The founding members of the International Partnership for Blue Carbon are:

The founding members of the International Partnership for Blue Carbon will develop a roadmap to guide their work, and work to bring in new members.